When the US F1 Grand Prix came round, I did debate what to cook a little. There are so many great American BBQ dishes I could have done but for the F1 Grand Prix cook in Austin, I had to do my version of the Austin Breakfast Taco.

I used to travel to Austin once every quarter with work, and I fell in love with the place. There was something relaxed about it and I really liked the people I worked with. In one way the time I spent there felt more like a holiday than being away working.

The office was in Round Rock, which is North Austin, but I tended to stay centrally where there were a few good places to eat and I could also easily get downtown. One of the rituals I got into was picking up a Breakfast Taco (or two) on the way to work with the obligatory black coffee. There are a number of pop-up vans on the side of the road where you could pick up some great-tasting Breakfast Tacos.

You can get them with a variety of fillings and usually get sauces on the side to control how spicy you want them. Maybe a wise choice as you wake those taste buds up in the morning.

Austin was added to the F1 Calendar after I stopped travelling over there. I will get back over one year, as it would be great to visit Austin again, catch the F1 Grand Prix, and experience those Breakfast Tacos again.

My version of Breakfast Tacos is made up of egg, bacon, sausage, potatoes, and tortillas (not to forget the sauces), which is pretty much what you would get in the ‘original’.

The first thing to prepare is the potatoes. I have recently been doing triple-cooked potatoes in duck fat and decided these would be good to try in the Breakfast Taco. I started these early so when it came to finishing them on the BBQ, it was a quick(ish) task.

The bacon was simply grilled, then cut into small slices and kept warm in the food warmer.  I then quickly warmed the tortillas before cooking the buttermilk scrambled egg.

Finally, I plated and topped them with homemade pickled Jalapenos, Rancheros Sauce and Tomatillo Salsa.

This version of Breakfast Tacos took a little effort. The triple-cooked potatoes are a bit of a ‘pfaff’ but there really are worth it, as was extracting the sausagemeat and cooking it in bite-sized pieces. You could simply cook all the ingredients and combine and you will have a tasty Breakfast Taco, but I so enjoyed this.

It really did take me back to Austin. I have a feeling the Buttermilk Scrambled Egg did it, but the Breakfast Taco had a lovely mix of textures, flavours and spice. Definitely one of my favourite F1 cooks and a highlight cook of 2021. 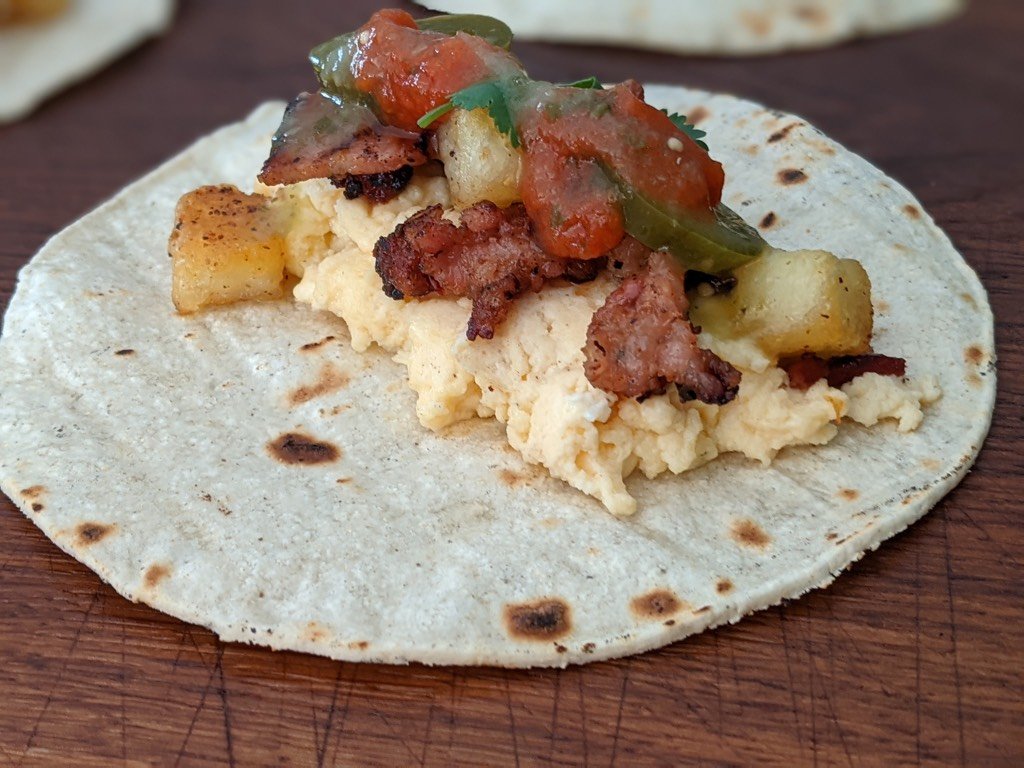