I was in two minds whether to write this cook up. After all, it’s a Toasted Cheese Sandwich, which most of us would have cooked and eaten at some point in our lifetime.

I decided to as before this cook, my Toasted Cheese Sandwiches were cooked using a Toastie Maker – I had never cooked one on a BBQ. Secondly, I added a couple of additional ingredients that I think could be switched to make different variations.

The idea for these came from a Christmas visit to Kew Gardens, to see the stunning light displays. At one of the food stops, there was a pop-up serving Toasted Cheese Sandwiches. They had these on a well-oiled production line, cooking them on a huge plancha. I had to have one and it tasted fantastic!

There is not a great deal of preparation required for these Toasted Cheese Sandwiches.

I don’t own a plancha for any of my charcoal BBQ’s (except for my Weber Go Anywhere), so decided to used the Char-Broil Professional 4600S. The Charbroil comes with a two-sided plancha grate. One side is fully flat and the other has slight ridges in it. I decided to go for the one with ridges hoping to get some grill marks on the bread.

As always, I started by getting the temperature of the BBQ to 180°C by putting both burners on. Once up to temp I turn one of the burners off.

Whilst the BBQ was coming up to cooking temperature, I prepared the Toasted Cheese Sandwich. First was mixing the cheese into a bowl. Next, I buttered the outside of the sourdough, and then flipped them over and spread the Sriracha Mayo over each slice.

Next, I added the cheese and jalapenos to one slice of the bread, building up in layers, before placing the other slice on top.

I wasn’t sure how well these would cook or how long to do them for. I ended up doing them for 2-3 minutes on each side with the lid down. Once I flipped the first time I used the Cast Iron Grill Press on the sandwich.

I always love a Toasted Cheese Sandwich regardless of how it is cooked, and really enjoyed cooking these on the BBQ. The Jalapenos and Sriracha Mayo gave them a different take and flavour. I was really pleased with how the bread toasted and also got some nice aesthetic grill lines. This will be repeated! 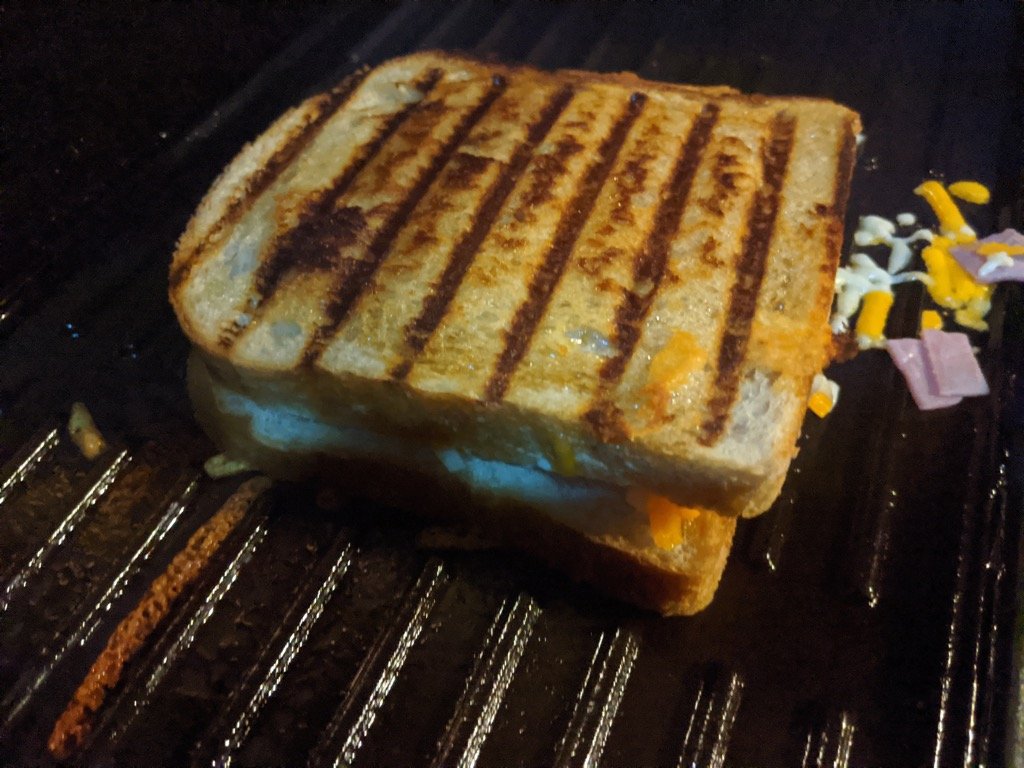 Everyone loves a Toasted Cheese Sandwich right?!? This one is cooked on the BBQ, with a mix of cheeses, Sriracha Mayo and Jalapenos! Soooooo good!!!!
Prep Time 10 mins
Cook Time 6 mins
Total Time 16 mins