Time to Try a Gas BBQ

Char-Broil approached me in late May to ask if I would be interested in reviewing one of their BBQ’s over the ‘traditional’ summer BBQ season. I am always keen to try new kit and share my thoughts, so I was delighted when I got this opportunity to review one of their professional gas BBQ’s.

The Char-Broil Professional 4600S has 2 separate fireboxes and has an ‘Infrared System’ which I was very intrigued to learn more about and see how effective it is.

So let’s start with a little confession. Gas BBQ’s are not my favourite to cook on. I have owned them in the past, but I have never quite got the same satisfaction cooking on gas as I do over charcoal. Not that there is anything wrong with cooking on gas, just my personal preference.

The Char-Broil Professional 4600S comes in a large box and actually got delivered on a pallet so that gives you some indication of the size. All the components were well packaged.

There are a lot of pieces to this, and if I am honest I was a little intimidated by it. As I have mentioned in previous articles, I am pretty rubbish when it comes to anything DIY.

I know Barbechoo James also got one of these to try out and he assembled his in 2 hours. There was no way I was going to get near that as James really knows his stuff when it comes to putting together BBQ’s.

I started by laying all the pieces out on the patio, and for once doing a stock take to make sure I had everything. All pieces accounted for I started the daunting assembly process. The instructions were pretty easy to follow and I didn’t get lost at any point. In terms of the process, I would split this into 3 main stages:

First up was putting together the bottom half of the BBQ, which is the main frame. This was the part that took me the longest. 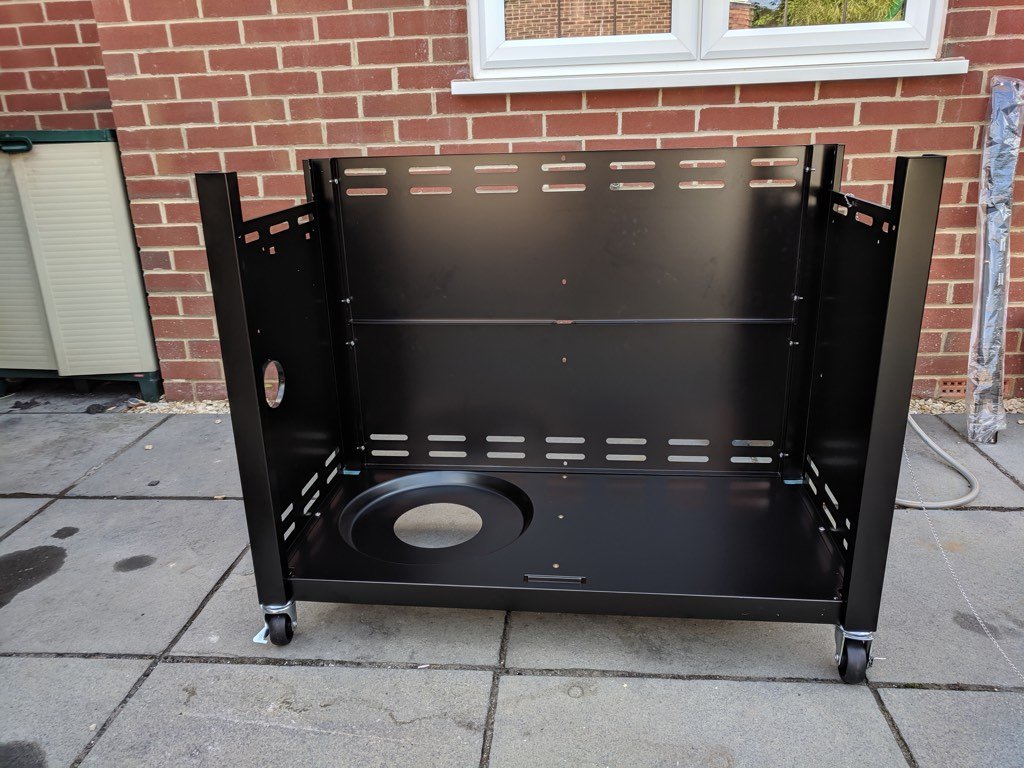 Next up was positioning each of the cooking fireboxes and securing them. Some of the screws to secure the fireboxes are in awkward positions. 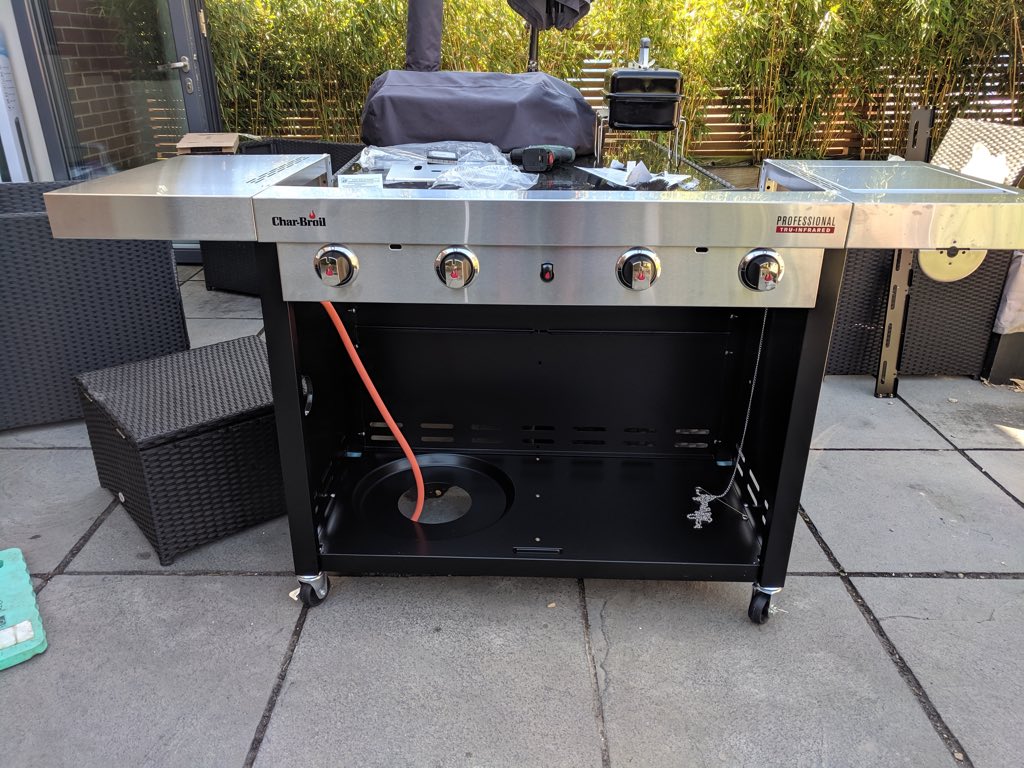 Finally, it was adding the burners and connecting to the gas.

In total, it took me 4 hours which I was pretty pleased with.

I ended up with a really sturdy stainless steel BBQ, which feels really well built, but be warned it is quite a large unit. I have plenty of space on my patio, but if you are considering this model makes sure you have space.

The Char-Broil Professional 4600S has some nice features, but the stand-out one is the Infrared Cooking System. The idea behind this is that it helps provide an even cook all over the grill, preventing flare-up’s and helps to retain moisture in the food. You can read more about this on the Charbroil website. Other notable features include:

Cooking on the Char-Broil Professional 4600S

Lighting and Getting Cooking

This grill is really easy to light. I don’t think I have had one occasion where it has not ignited first time. It really is easy. Turn the gas knob for the burner you want to light and press the electronic ignition switch. Never failed yet.

One of the appealing features of having a gas BBQ is the speed that you can get cooking compared to charcoal. However, you still need to get the firebox to a reasonable temperature. Personally I think the infrared system also works better when you have heated up the firebox and iron grates. 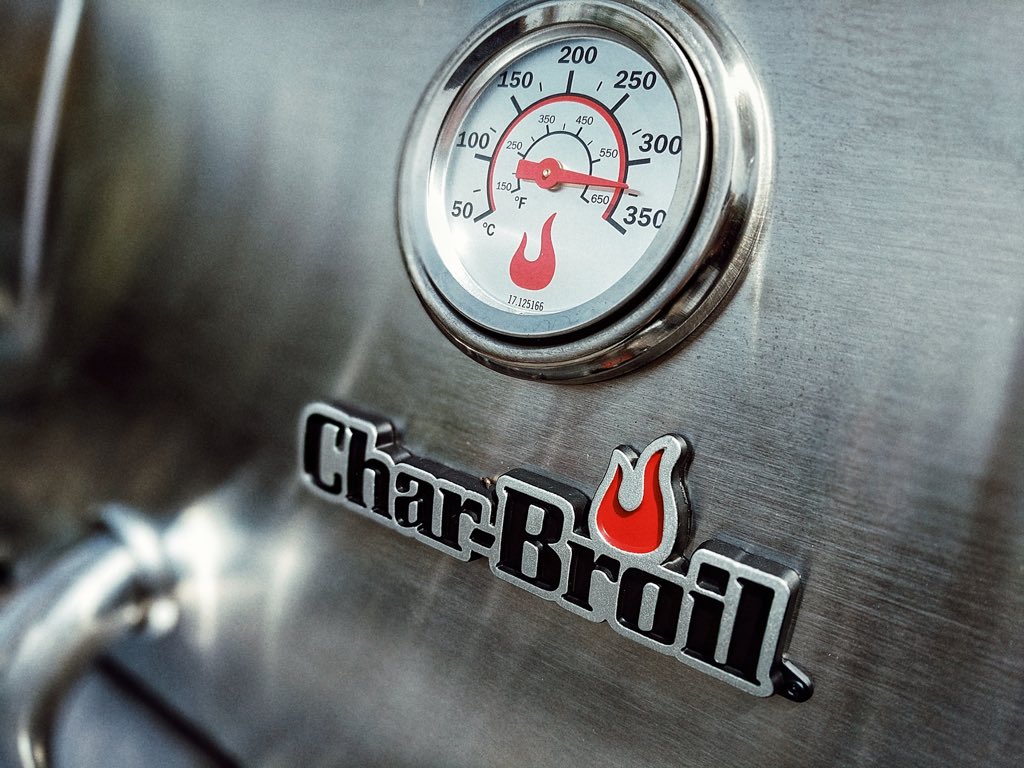 After having both burners on in a firebox on full for 10 minutes, the BBQ reaches a temp of around 180°C which is ample for most foods you want to cook. However, if you want to get it really hot it does take much longer.

Over the past 6 months, I have cooked a variety of foods on the BBQ. The thing I did fall in love with almost immediately was the side-burner. When I was cooking on the charcoal BBQ’s I would use the side-burner to do side dishes (quite often Asparagus). It is so handy for that. 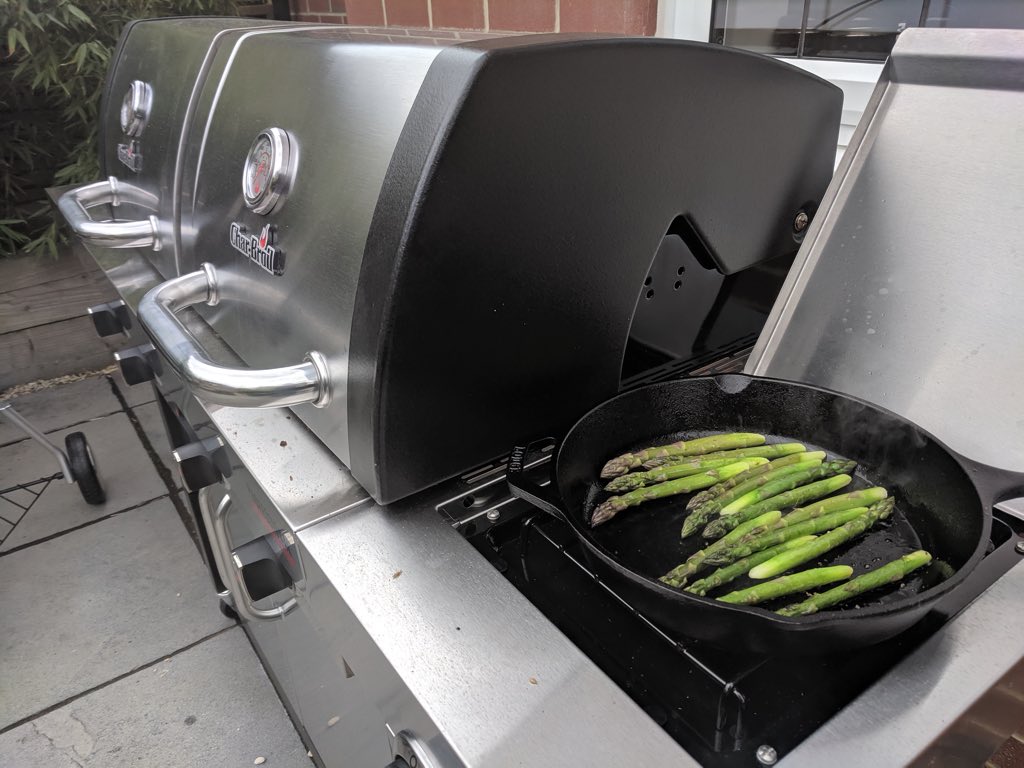 In terms of the cooking in either of the fireboxes, I think it does this extremely well. The infrared system took me a little bit of time to get use to and I have mixed feelings about it.

I can honestly say it does give really good results every time. Of course, you need to keep an eye on your food and make sure you are using essential accessories like the Thermapen, You won’t suffer from flare-up’s and the heat never seems hard to control. The result is that it is very easy to cook on and if you tend to get a bit stressed about cooking on the BBQ, this grill will definitely help.

If you like putting grill marks on your food, again the 4600S will hit the mark.

The other thing I really liked about the 4600S, is using wood chips. Normally, with a gas BBQ, you can buy a metal box and place wood chips in it to inject some natural smoke into your food. With the 4600S you can actually just place the wood chips directly onto the grate and let them smoke away. You just need to make sure you clean the infrared grates occasionally.

For me personally, I find the Char-Broil a little boring to cook on. I really like the challenge of starting a fire, controlling the heat and having to manage the cook. The convenience for midweek cooks is fantastic, but in a year where I discovered the fun I get from cooking in a fire bowl, the experiences are very different.

Firstly, I need to say a huge thank you to Char-Broil for sending me the 4600S to review.

The build quality is excellent. The fireboxes are stainless steel and they have been exposed to the elements for the last 6 months and have shown no issues. I clean them down about once a month with stainless steel cleaner and it has kept them looking good.

Internally, the grates are in great shape too. I brush them before every cook and they clean up really easily. There is a ridged infrared plate that sits beneath the grates that have small perforations in and these need to be cleaned on occasion to keep the holes clear. As for the burners they are all looking in good condition.

Cooking is relaxing and easy. It’s easy to control the heat and unless you neglect to watch your food, you will produce great meals using this. I have had no flare-ups. I have only had one disaster, which was fully my fault when cooking some aubergines, which I ‘forgot’ about. Even then they were edible just a little well done.

As mentioned above, I just found it a little easy to cook on. I look at that as a positive, as I am sure there are lots of people out there who get a little intimidated cooking on a grill. If you fall into that category, I would recommend looking at any of the Char-Broil range that have the Infrared system.

The 4600S is a big 4 burner BBQ.  Depending on how many people you tend to cook for, it could be worthwhile looking at a two or three burner.

You can currently pick the Char-Broil 4600S up for around the £700 mark, which puts them in the same price range as the Weber Genesis series. However, most of the Weber BBQ’s only have 3 burners and do not have the benefit of the 2 fireboxes.

In summary, good build quality, easy to cook on, lots of space when you are cooking for larger numbers, easy to clean and definitely one to consider if this is within your budget.