For the F1 Grand Prix cook for Belgium, the obvious choice would have been Mussles with Frites. I have cooked mussels so many times on the BBQ, and part of the enjoyment of these F1 cooks is finding new dishes and figuring out how to cook them on the BBQ.

Meatballs seem a pretty popular food in Belgium (and the Netherlands) and I came across a couple of recipes that gave me the inspiration for this cook. I did have some fun and games cooking it, but again that is part of the enjoyment.

The other dish I discovered was Stoemp. I didn’t cook this on the BBQ, but it was so good. It is basically mashed potatoes, with ‘other’ vegetables and lashings of butter! Definitely a keeper.

This was a pretty quick dish to prepare and cook. The longest part was pitting the cherries, but for the meatballs, it was a case of throwing the ingredients into a food processor and mincing well before shaping them. With the cherries, I placed them in a pan with some quince paste, balsamic vinegar and white wine vinegar and reduce them down into a glaze.

The BBQ was set up for 2-zone cooking, placed the cast-iron on the direct side and heated up some oil in the cast-iron skillet. The meatballs started in the skillet, but I then realised that the cherry glaze was going to have high sugar content, so I was concerned that they would start to burn. I removed them to the indirect area of the grill, and then applied the cherry glaze with a pastry brush.

I kept rotating the meatballs and applying the glaze until the internal temperature hit 65°C.

I really enjoyed this cook. I have cooked meatballs on the BBQ before, but they have been in a sauce. Starting them in the cast-iron worked well, but you could just add these directly to the grill and then once they start to firm up apply the glaze. This is how I would cook them next time.

The cherry glaze was not as strong as I expected (even with pouring the remaining cherries and sauce over the meatballs) but they were really tasty. What I did really like was the Stoemp. If you are a fan of mashed potatoes you will love this!!! 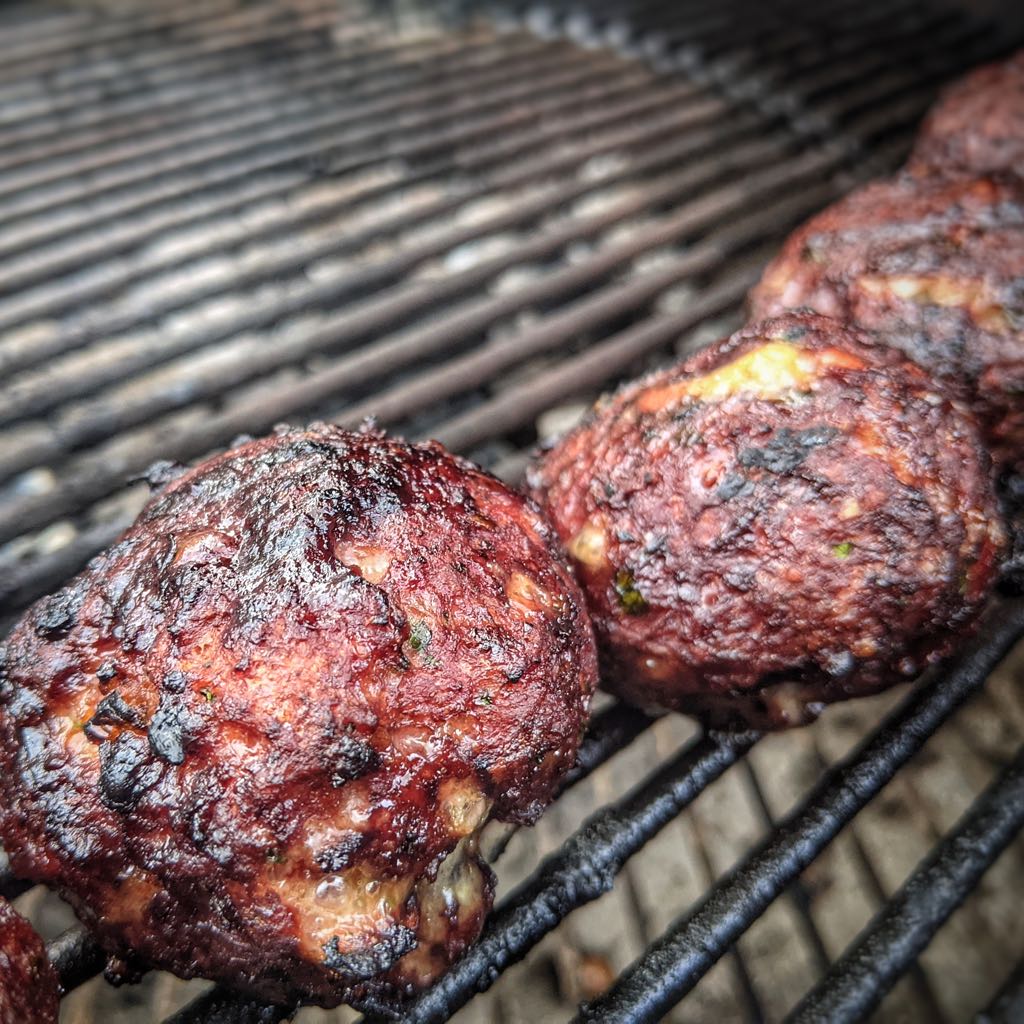 These beef meatballs are cooked on the BBQ and glazed with a cherry sauce. Served with Stoemp (a creamy mashed potatoes with veg) went so well with this producing a lovely dinner.
Servings 2 people
Prep Time 30 mins
Cook Time 20 mins
Total Time 50 mins