A First for Me!

I have eaten Confit de Canard before but have never cooked it. I had quite a few choices for the F1 Cook for France, but the process involved in preparing and cooking the duck really appealed. It basically was done in 3 stages:

The challenge here was figuring out exactly how I would do it on the BBQ.

I ordered two duck legs from The Dorset Meat Company. They work with 20 small, family-run farms based in Dorset and Wiltshire that produce really wholesome, natural meat. Everything I have had from them has been spot-on!

The first stage of the process is to cure the duck. I read a few different recipes and they recommended anything from 12-48 hours. I ended up going for a 36-hour cure.

After curing and then washing off the cure the next step was to cook the legs in duck fat. This was the first part of the cook on the SNS Kettle Grill. I was going to use my dutch oven but I was worried it was a little too big so just did it in a standard oven casserole dish. The duck ends up submerged in the duck fat. The challenge here is to keep the duck fat at a steady temperature (100°C). I did sit next to the BBQ and had to constantly adjust the temperature of the BBQ to keep the temperature of the duck fat reasonably stable. It took a bit of effort but I really enjoyed playing around with the vents. The SNS did a great job here.

Once you have cooked the duck, you can allow it to cool and (apparently) it will keep for weeks in the fridge. However, my third stage was to remove it from the duck fat, pat it dry and then cook it in the Petromax Iron Skillet to crisp up the skin.

This was by far the best dish I have cooked in 2021! I could not have wanted it to come out any better. It takes a fair bit of prep and the second stage of cooking takes a bit of looking after but it was so worth it. The duck was so tender and just came away from the bone. The taste was immense and went so well with the duck fat potatoes. This is definitely a winning dish and one that I am glad I have added to my repertoire. 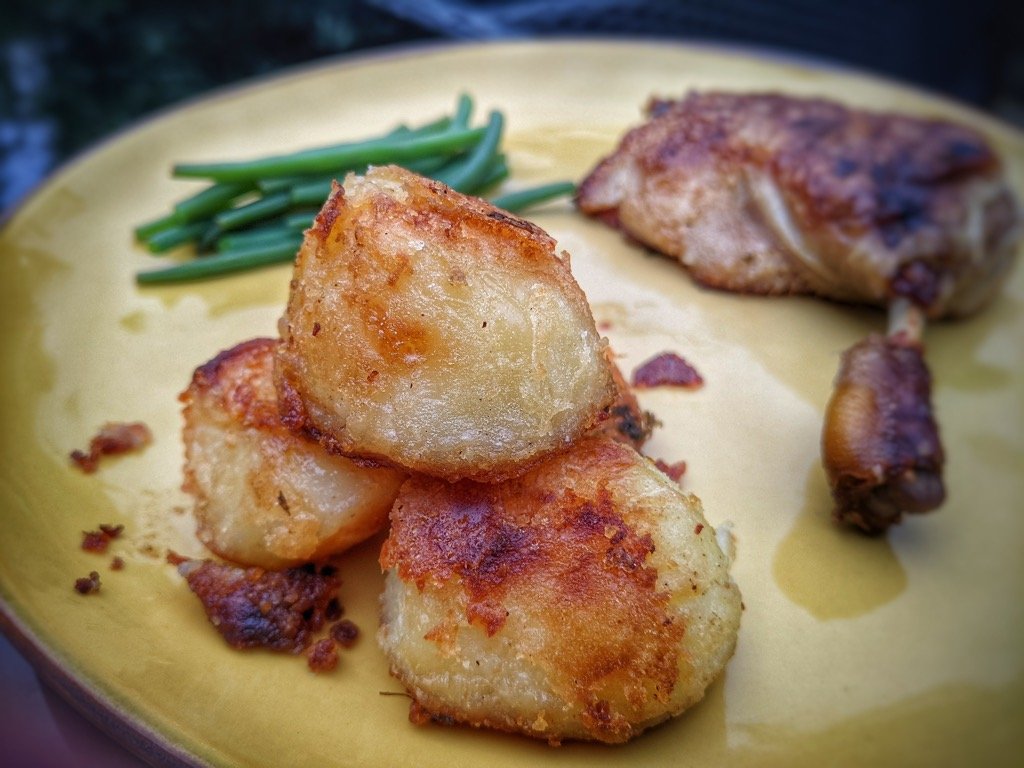 For this classic French dish, the duck legs are cured before being submerged in duck fat and gently cooked on the BBQ, before having the skin crisped up.
Servings 2 people
Prep Time 30 mins
Cook Time 2 hrs 45 mins