Seafood on the BBQ

Every time I cook seafood on the BBQ I ask myself why I don’t do it more often. This Greek inspired Sea Bream certainly hit the spot and I will be cooking it again.

I stumbled upon a fantastic article from @BBQVentures, which gave me the inspiration to cook some fish this week. It really is worth a read. Bill gives some seasonal suggestions, month-by-month, of the different seafood you can try on your grill.

I wasn’t sure what fish I was going to cook, but I wanted to do something with a Greek influence. The only while fish they had in Waitrose was Sea Bream. I got them to gut it and also take the scales off. I have taken scales off myself before, but I was finding them all over the kitchen days later, so I would recommend you getting your fishmonger to do all the hard work.

I started by preparing the Sea Bream. I made the marinade and then made 3 incisions into each side of the Sea Bream and then covered it in the marinade for 30 minutes. This is the Greek-inspired bit, with the ingredients for the fish including Olive Oil, White Wine Vinegar, Greek Oregano, Lemon and Garlic.

In the meantime, I started to prep the BBQ. As a late decision, I decided to used the Char-Broil Professional 4600S to cook this dish. Whilst I have previously cooked fish on the BBQ, I have not used the Char-Broil before, and was intrigued to see how the Infrared-system would cook the fish.

As always, I started by getting the temperature of the BBQ to 180°C by putting both burners on. Once up to temp I turn one of the burners off so I have a direct and indirect zone on the grill.

When the temp was at 180°C, I placed some cherry wood chips from Smokewood Shack. One thing I really like about the Infrared-system on the Char-broil is that you can put wood chips directly onto the grate to produce additional smoke for added flavour.

Remove and plate up. I decided to spoon some home-made Tzatziki over the lettuce and sprinkle some Pomegranate Seeds over the whole dish.

Bill’s article certainly gave me the inspiration to cook fish again and it is something I really need to do more often. The Sea Bream came out great and tasted really fresh. I loved the greek inspired flavours on the fish and this is another recipe that will get repeated.

Like everything I have cooked on the Char-Broil, it does it really well. That Infrared-system is really quite impressive! 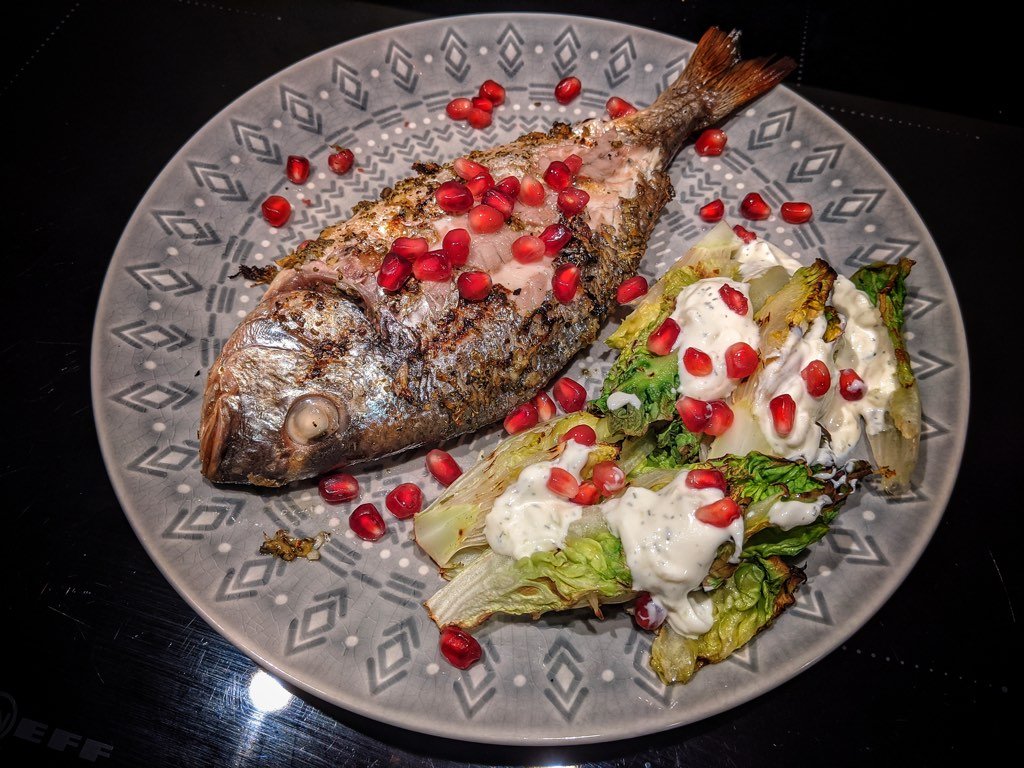