During this horrible pandemic, one of the good things to come out of it is that we have found a number of British producers of fantastic products. My wife had seen an article covering The Ethical Shellfish Company and when they started offering home delivery, we jumped at the chance to order.

The Ethical Shellfish Company began on the Isle of Mull in 2010, dive fishing for King Scallops. The concept was to create a fishing company with a difference – one that would put ethics at the very centre of its priorities and would never sell seafood that had come at the cost of the marine environment.

We ordered the Scallops and Langoustines, however, I got a bit of a shock when I opened the packaging, as the Langoustines were still live!!!

I had already done a little bit of reading about the best way to cook the Langoustines. I hadn’t expected them to be live so it was time to hop on google and do a little more research. The Langoustines got placed in the fridge (in their bags) with a damp tea towel over them.

We were due to have these for lunch, so an hour or so before I got them out of the fridge (and yes they were still moving), and then put them in the freezer for 15 minutes. This is meant to sedate them but didn’t work very well. They got put back in the freezer for another 5 minutes but still didn’t seem to work.

I decided to take the plunge and start preparing them. Basically, this involved placing a knife in the mid-drift of the Langoustine and splitting it in half towards the head-end. I then repeated this splitting the Langoutive towards the tail.

Once split I removed the stomach sac and intestinal tract from each one. I then brushed them with a garlic and lemon dressing.

As it was such a nice day, I decided to cook the Langoustines on the Kadai Firebowl. There is something so enjoyable cooking on it. It does require a little more effort than cooking on a BBQ but I enjoy it so much.

Once the firepit was ready to be cooked on, I placed the Langoustine on meat / open side down for a couple of minutes. I then turned them over and gave them another brush of garlic and lemon oil mix and cooked for a further 2-3 minutes.

To serve I squeezed some fresh lemon juice over them.

This will be no surprise but these tasted amazingly fresh, which you would expect. I overdid it slightly with the lemon juice so would ease back on the final squeeze of lemon juice at the end. They are remarkably easy to cook and tasted fantastic being cooked on the firepit.

I would definitely recommend you trying this if you can get over the fact you will need to kill the Langoustines. 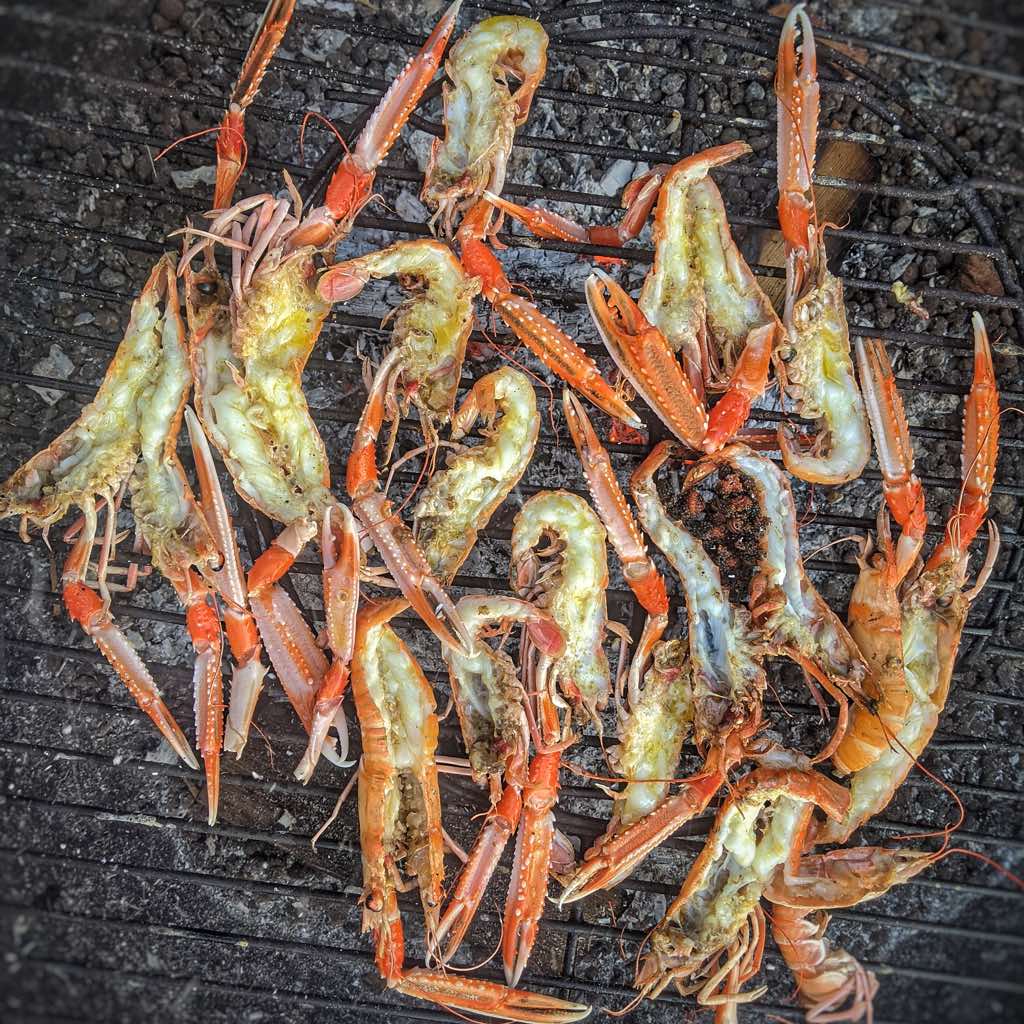