I have had these Iberico Bellota Pork chops before, which were ordered from Fine Foods Specialists. I was really impressed the first time we had them so ordered them again, not really having a recipe in mind for them.

Over the past couple of years, we have done a lot of the ‘eat-at-home’ boxes. One of our favourite companies to order from is Home-X. We had a meal recently that had Chicken Wings with a Gochujang Glaze, which we both loved, so I thought a similar glaze on the Pork Chops would work well.

This was quite a straightforward cook. I always take the meat out of the fridge about an hour before I want to start cooking to bring it up towards room temperature.

Once I lit the BBQ I started making the Gochujang Glaze. This was done over medium-low heat gradually adding the ingredients and slowly reducing them into a lovely glaze.

For the cook, I used the SNS Kettle. I really love this BBQ. The ‘Slow ‘n’ Sear’ can be used to easily create 2-zone cooking, and I used the raised grate to cook the chops over the direct zone, so there was a little space between the coals and the meat. I took the chops to around 55°C before applying the glaze. There is fairly high sugar content in the glaze, so I didn’t want to add too earlier as it would burn.

I also cooked some Tomagashi New Potatoes cooked in Duck-fat. These were simply par-boiled and then cooked in the Duck-fat (and salt), using the Lodge cast-iron skillet. Towards the end of the cooking, I gave them a sprinkling of the Tomagashi spice – worked really well.

The Iberico Bellota Pork Chops were amazing. I took them off when they were around 65-70°C and allowed them to rest for 2-3 minutes. They were so succulent it was unreal. The Gochujang Glaze was sweet with a hint of spice but didn’t overpower the pork, which was exactly what I was looking for. Another keeper here!!! I also think the glaze would well on Chicken Wings. 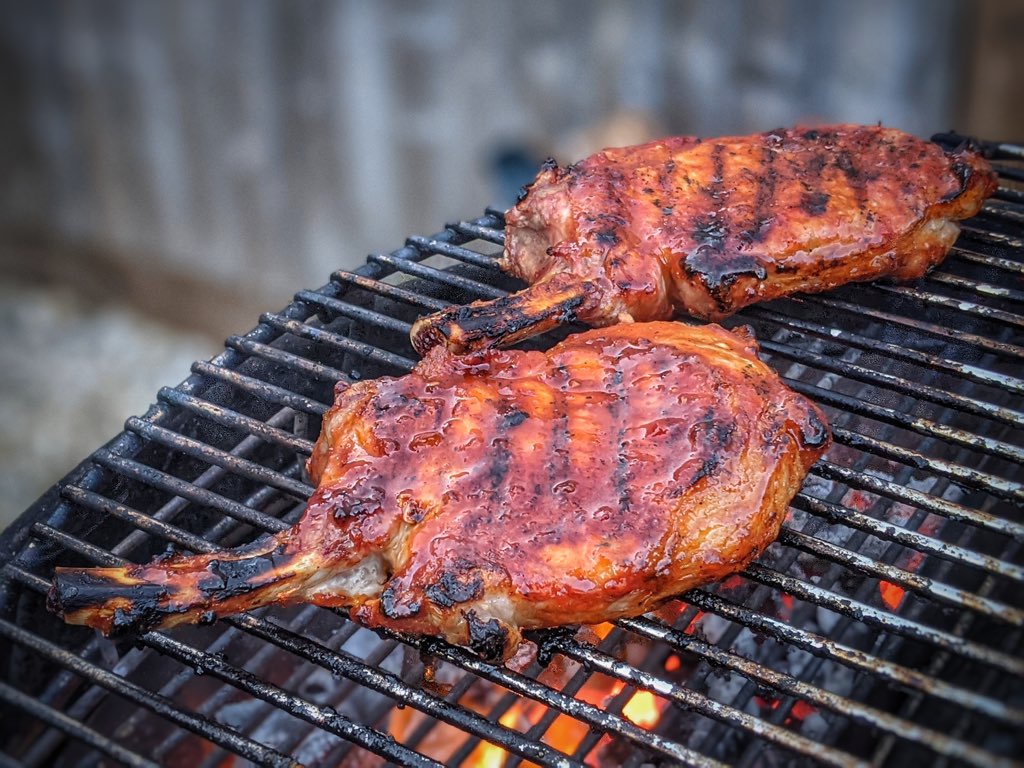 Pork from Iberico Pigs fed on a diet of acorns produces amazing succulent meat. The Gochujang Glaze goes so well with this adding some sweetness with a hint of spice.
Servings 2 people
Prep Time 20 mins
Cook Time 15 mins