The generous Flame and Dame sent me a present recently. It was a food box full of South East Asian (mainly Korean) ingredients. It has given me the inspiration to try new some new flavours in my cooks, as prior to receiving the gift I had not really cooked much South East Asian influenced cuisine.

A couple of weeks ago, I cooked these Gochujang Chicken Drumsticks, which came out so well and added to my enthusiasm for wanting to cook with these ingredients. I had ordered some Beef Short Ribs from Philip Warren – On the Pass, so decided to give them a go in the Weber Smokey Mountain (WSM).

I watched the Masterclass series from Aaron Franklin recently, and one of the many things I took from it, was the importance of planning the cook. I have always made notes on the cook but not sure I have properly planned cooks. It’s an obvious thing to do really, and quite ironic I haven’t done this previously as I am a planner.

At 8 am, I made the marinade and slathered it over the beef short ribs before placing them back in the fridge. I can’t tell you how good they looked. Unwrapping them got me pretty excited about how these were going to turn out.

I started to set the smoker up at around 10 am, at the same time getting the beef short ribs out of the fridge. I cook with charcoal these days (as opposed to briquettes). The Premium Professional Lumpwood from The Green Olive Firewood Company is great as you get some huge chunks coming out of each bag. I was aiming for a starting temperature of around 235°F. I have started to ‘cheat’ a bit these days and now have Flame Boss. It really helps regulate the temperature of the smoker, so you can go off and do other things and wirelessly keep an eye on things.

The Plan versus the Reality

So how did the cook pan out against my plan:

I had planned for a cook of 8 hours, but I think this is more like a 6-7 hour cook. It was quite windy on the day, and the temps did rise to 250°F a couple of times, but I don’t really think this impacted the length of the cook.

From the moment I unwrapped the beef short rib, I had a good feeling about this cook. The uncooked ribs looked absolute quality. This continued when I unwrapped the cooked beef short rib from the foil. I could feel how tender they were, and when cutting them it literally was like a knife through butter.

I have cooked beef ribs before and despite doing them low and slow they have still been a bit gelatinous. These were unbelievable. Incredibly tender meat that melted in the mouth. The surprising thing was they did not taste more of the base ingredients. This is why next time I will marinate these overnight.

It is safe to say these were by far the best dish I have cooked in 2020. I really enjoyed the cook and ended up with a great result. I’m also going to keep planning out cooks, as I think that really helped focus me throughout the cook. 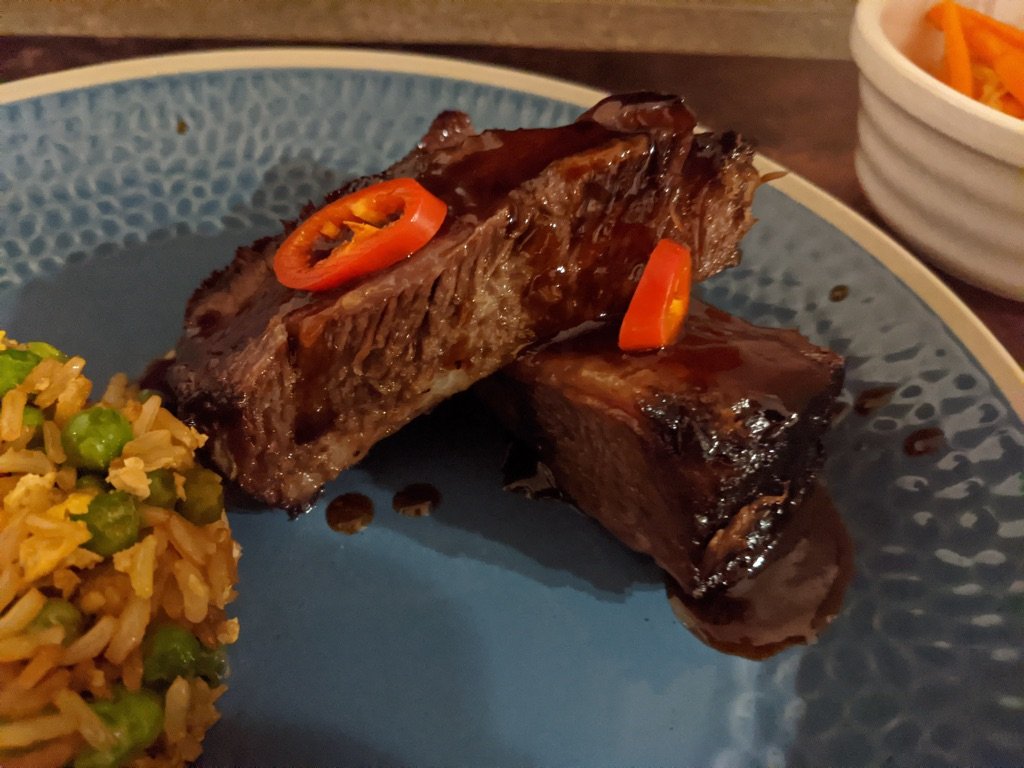 This Beef Short Rib cook really knocked my socks. I loved the Korean inspired flavours and the quality of the meat was unbelievable!
Prep Time 30 mins
Cook Time 6 hrs 30 mins