As part of my F1 cooks where I am doing a cook from each country where the F1 race is held, I went for Piri-Piri Chicken for Portugal. I know this is quite an obvious one, but a few reasons I chose it. Firstly, I really like Piri Piri Chicken, so it was a great excuse to have it again. Secondly, I have never made it with the sauce from scratch, which I really enjoyed doing. Finally, it is a great dish to cook over coals on the BBQ.

At its most basic Piri Piri Chicken is grilled chicken that has been marinated in a spicy chilli sauce. Some of the recipes I came across didn’t marinate the chicken but just basted the chicken with the sauce as part of the cooking process. There was also a question of whether to leave the skin on or take it off. Again, different recipes recommended different approaches.

After doing a fair bit of research, I opted to marinate the chicken in the Piri Piri chilli sauce and also to take the skin off.  I prepared it first thing in the morning for a cook that evening so the chicken was going to get around 8 hours marinating.

The majority of ingredients I went for are ones you are likely to have in your cupboard. The only specialist purchase was the African Bird’s Eye Chilli, sourced from the Chili Mash Company.

About an hour before I wanted to start cooking, I removed the spatchcocked chicken from the fridge to bring up the temperature before cooking. Next was preparing the BBQ. For this cook, I used the SNS Kettle, with a first run-out for the Slow ‘n Sear Deluxe, which makes it easy to create an indirect and direct zone. The direct zone is really hot which makes it great for searing meat and the indirect zone is great for baking or oven-type cooking. It doesn’t matter if you don’t have the Slow ‘n Sear, just create 2 zones that you can cook on.

I did use some of the marinate in the tray to keep basting the chicken through the cook which built up some great colour on the chicken.

The cook took around 1hr 30minutes, but I always like going by temperature using my Thermapen. An instant-read thermometer is critical regardless if you are cooking indoors or out.

Once ready, I removed from the BBQ and let rest before slicing.

When I tasted the marinade on its own I was a little concerned at the spiciness. I like spicy food but my wife is not as keen. However, once cooked the spiciness was toned down a bit. It still had a bit of a kick but it wasn’t overpowering.

I absolutely loved this cook from the research, making the Piri Piri marinade through to the final cook. It worked really well and I loved the end result. Luckily I had enough leftovers to get another couple of meals from the Piri Piri Chicken. An obvious dish to cook from Portugal but definitely the right one to choose. 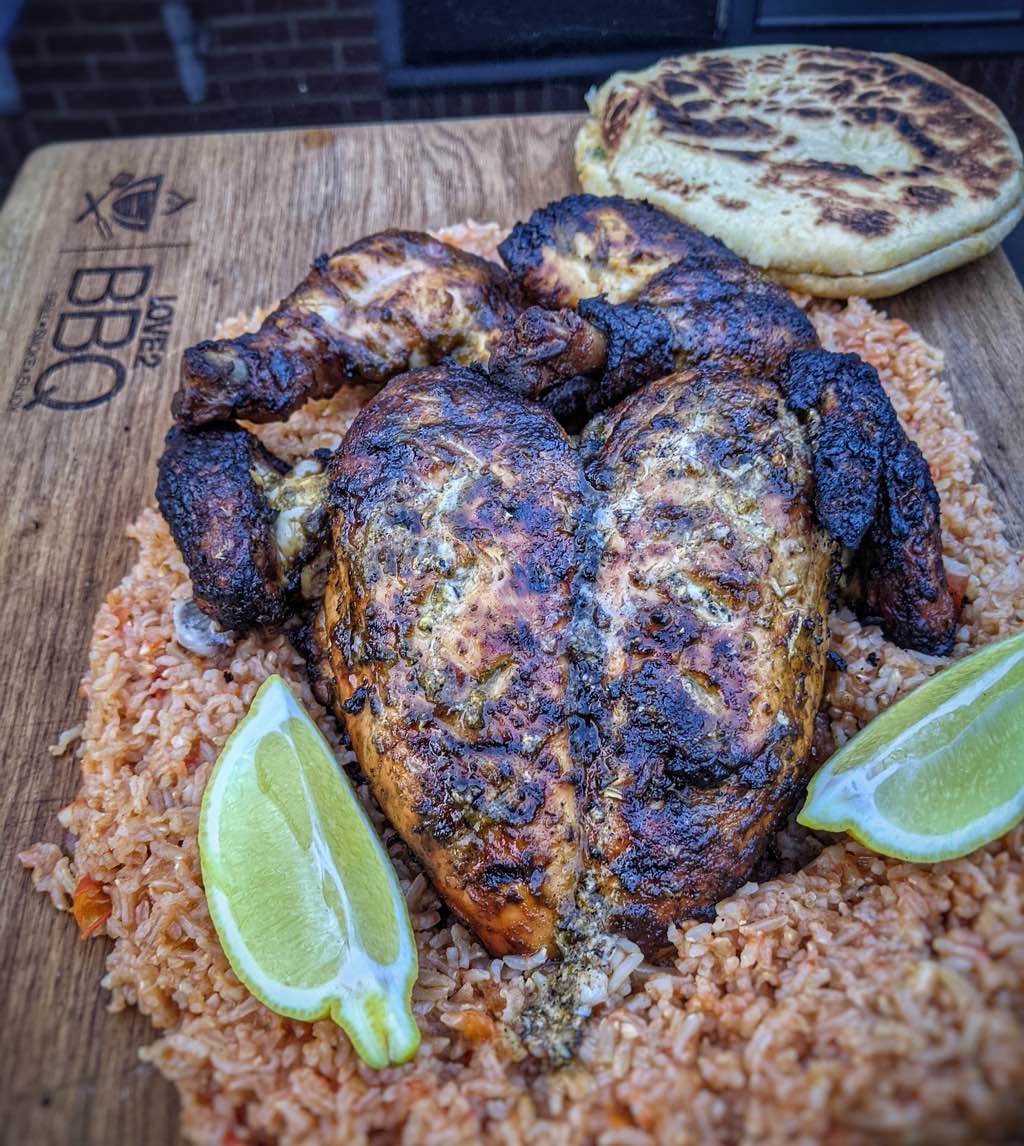 My sauce ended up being green where traditionally it is a reddish colour. This was caused by the amount of Parsley I added. It’s an ingredient that is not always used in Piri Piri so if you want the red Piri Piri sauce, reduce the quantities or miss it out altogether.
Course: Main Course
Cuisine: Mediterranean
Keyword: Peri Peri, Piri Piri, Portugal, Portugal Chicken