One of the classic big meats to cook on the BBQ is a Pork Butt. Pork Butt is an American term for a cut of pork that comes from the upper part of the shoulder, from the front leg and may contain the blade bone. It is also referred to as a Boston Butt.

I have cooked a few of these now, but this was a slightly different cook as it was my first overnight smoke. We had 24 guests to feed, and this was due to be the highlight of the BBQ.

I purchased two 4kg Pork Butts online from Turner and George, which are one of my favourite online butchers. These come with the bone-in and both had a thick layer of fat on them, which I trimmed down before applying the rub. Don’t throw this as it is great for making pork crackling, which was also done on the BBQ.

For the rub, I got some great advice from @onlyslaggin and mixed together 2 different rubs from Oakridge BBQ Rubs, which worked fantastically well. To help the rub adhere to the pork, I brushed the pork with French’s Classic Yellow Mustard.

In terms of time, it is difficult to say how long this should take. I was advised that they would take around 16 hours but they ended up taking 19 hours. After speaking to Nathan from KungFuBBQ I cooked these at 235°F. It is definitely worth cooking these at a lower temperature as the end result is outstanding.

I used cherry wood chunks and spritzed the meat every hour from around 3 hours (except the overnight portion).

The cook, in general, went really well. I started it at 830pm hoping to remove the pork at around noon. I had a fairly big stall overnight, but from around 7am the temperature of the meat slowly climbed. However, it took until 330pm, until they hit an internal temp of 203°F. I took them off and triple wrapped them in foil for 2 hours (another recommendation from @onlyslaggin).

I cooked another 4kg Pork Butt last week and it ended up taking significantly less time than I expected. It was actually ready 6 hours early!

So the pork was ready 6 hrs early. I initially wrapped the pork in butchers paper and reduced the heat on the smoker to 130f. Jim suggested wrapping in towels and putting in a coolbox. 4 tea towels and a bath towel later I pulled it out of the box at 8 and pulled.

After pulling I then warmed through some apple juice in a large frying pan and warmed the pork through further in the apple juice and then added some BBQ sauce. Bought it all back to life! 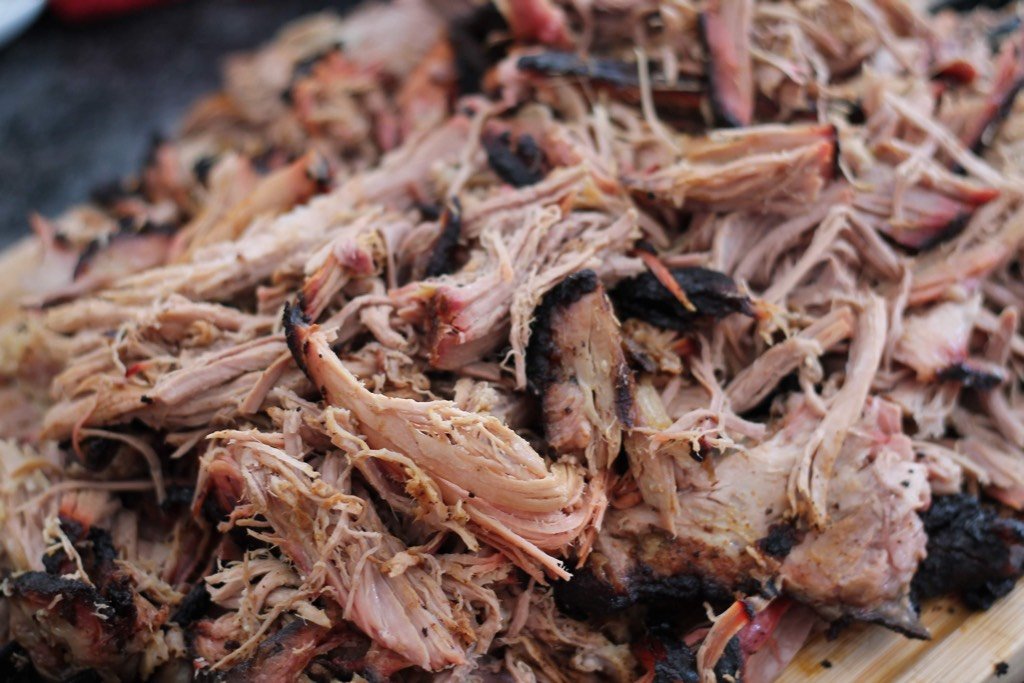 I have smoked pork butt a few times now but did these on a lower temperature and also used a different rub mix. Served with pork crackling and home-made apple sauce. Read my method and full recipe.

This website uses cookies to improve your experience while you navigate through the website. Out of these, the cookies that are categorized as necessary are stored on your browser as they are essential for the working of basic functionalities of the website. We also use third-party cookies that help us analyze and understand how you use this website. These cookies will be stored in your browser only with your consent. You also have the option to opt-out of these cookies. But opting out of some of these cookies may affect your browsing experience.
Necessary Always Enabled

Performance cookies are used to understand and analyze the key performance indexes of the website which helps in delivering a better user experience for the visitors.

Analytical cookies are used to understand how visitors interact with the website. These cookies help provide information on metrics the number of visitors, bounce rate, traffic source, etc.

Advertisement cookies are used to provide visitors with relevant ads and marketing campaigns. These cookies track visitors across websites and collect information to provide customized ads.

Other uncategorized cookies are those that are being analyzed and have not been classified into a category as yet.