As the F1 Championship moved to Mexico, there was lots of choice of cooks for the F1 Grand Prix cook, but I settled on Tacos Al Pastor. A couple of reasons. Firstly, I love Tacos. They are always so tasty and bursting with flavour. Secondly, I have never cooked Tacos Al Pastor. For me, that is really important, as it helps me discover new flavours and foods.

Doing my research, there are different meats you can use for this Tacos Al Pastor, but the most popular is Pork. I then had to work out which cut to go with and opted for a Pork Shoulder from my local butcher, The Caversham Butcher.

The evening before I wanted to cook, I started my prep. The first thing was to make the marinade that the pork was going to sit in overnight. The next step was to slice the Pork Shoulder. I was a bit concerned that I had got the wrong cut of meat. Pork Shoulder is a little fatty and also when thinly sliced, I initially wasn’t sure the slices were all going to be large enough to stay on the spit. I had nothing to worry about.

The meat marinated for about 16 hours, and I took it out of the fridge an hour before I wanted to start my cook. I set up the rotisserie with the 2 charcoal baskets on either side of the rotisserie so the meat would not get direct heat. Once I added the spit, I also placed 4 cherry wood chunks on the coals for some added smoke and colour.

As the pork was cooking, I diced the pineapple, gem lettuce and made some Al Pastor onions, by mixing some Al Pastor Spice Rub from The Smokey Carter with some onions and olive oil. They were really good!!

It’s difficult to say how long you should cook this for. Mine took around 1 hr 45 minutes. I think it is always better to cook to temperature and use time as a guide. I was aiming for 70°C when I probed the meat. You will also find that the outside will get some charred pieces, but personally, I love these.

On taking the pork off, I placed it on a large wooden chopping board and let it sit for 10 minutes before slicing. As the pork was resting, I cooked the tacos before combining the ingredients and serving.

This was the first time I had ever tasted or cooked Tacos Al Pastor. It knocked my socks off. With the ingredients for the marinade, I expected a lot of heat but it is a really pleasant spice and very flavoursome. I think cooks like this are relatively straightforward and they really pack a punch. There is some effort prepping the marinade and meat, but the cook it really easy and will give you a fantastic meal.

This will be a regular for me now. Just can’t believe it has taken me so long to try it!!!

This recipe was based on the Tacos Al Pastor recipe on Great British Chefs. 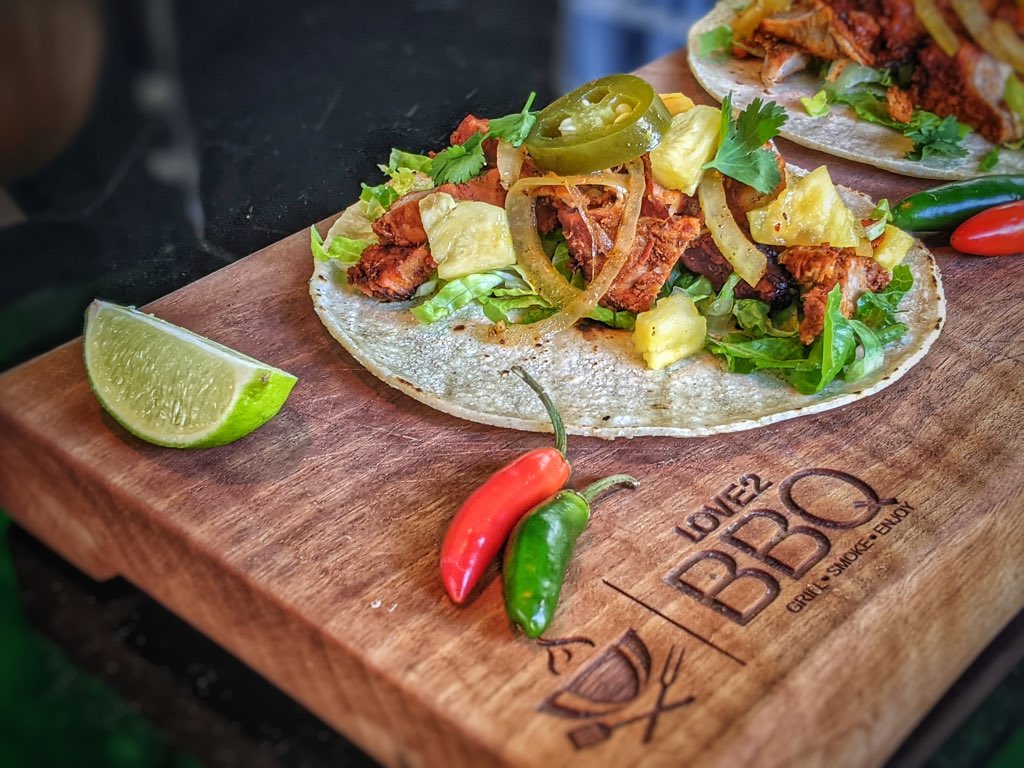