Review of the Weber Traveler

Gary (@Glitch33) is an active member of the BBQ community on Twitter. He produces some great cooks and is pro-active in sharing his insight and knowledge on all things BBQ.

He took the plunge recently and picked up the Weber Traveler at a real bargain price.  Read his thoughts on his new purchase.

I can’t believe it and neither can my family and friends. I have bought a gas BBQ!

I’ve always liked playing with matches and lighters, wood or charcoal. For me, that’s a big part of the BBQ and grilling experience. However, I have succumbed and ventured into the dark side. I couldn’t resist a bargain so when @redrustyBBQ (Russell) put out a notice of B&Q’s half-price BBQ sale I had to go for it. Also, I’ve been successfully influenced by @KungFuBBQ (Nathan) with his great holiday grilling pics with the Traveler. 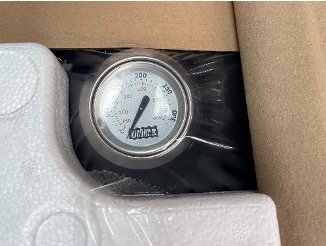 It took a while for B&Q to deliver but the Weber Traveler eventually arrived and with the usual excitement, I went about unpacking it. Always pays to be careful and worth taking a few photos as you unpack, just in case there is any damage. This came very well cocooned in the factory packaging and in perfect condition. Too much polystyrene perhaps which is not for the eco-friendly.

There is very little assembly needed. Just the axle and the plastic wheels. Very quick and simple and no surprise if you’ve put together a Weber kettle before.

Wheels on, it’s ready to try out the raising and lowering. I’d seen this on a few videos so knew what to expect. Foot on the red pad on the lower stand, then pull up one-handed, holding under the side table. Dead easy. You will, of course, forget to disengage the ‘Cart lock’. This is the small red catch on the front edge of the table. After a few times of operation, you remember to unlock it before lifting. 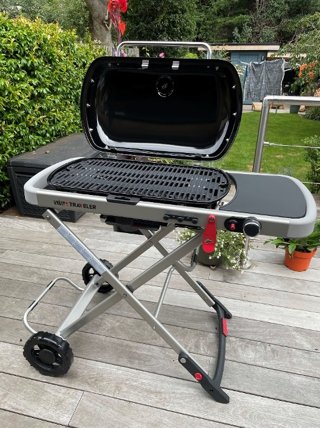 You can now see the Traveler in its operating position. It is well designed and looks very stylish. The wife likes the look of it and that has to be a big plus.

The quality of the finish is good. The materials look and feel fine. I found a little roughness in the edge of the porcelain-enamelled lid, along the edges at the back. It’s an area you wouldn’t normally touch and the rest of the enamelled lid looks perfect. Like a Model T Ford, it’s available in any colour you want as long as it’s black. Thankfully it looks great in black and can’t imagine me wanting any other color. The handle and the silver band around the lid add to the aesthetics and the quality. 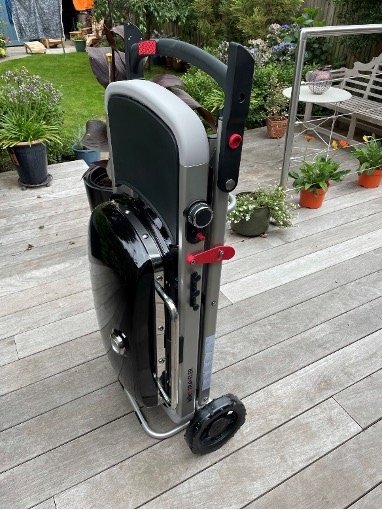 Lowering the unit back to ‘wheelie’ or storage mode is very simple. Remove the gas cylinder first. Foot on the pad and slide the release lever under the side table. As it lowers just let go and it will fold and lock itself. It has a gas strut that controls the descent. I guess the novelty will eventually wear off but it is a neat design feature. Then just pick up the handle and wheel it like a carry-on suitcase. Another good design feature is it will stand upright by itself when folded. Handy when moving it around and it can easily be tucked away in a shed, shack, or garage because it has a small footprint.

This unit is not exactly light at around 22kg so being able to wheel it is probably a necessity. It’s not exactly portable like the Weber Smokey Joe or the Go Anywhere. It can become slightly more compact if you rotate the foot stand but you still need a sizable car boot to transport it. 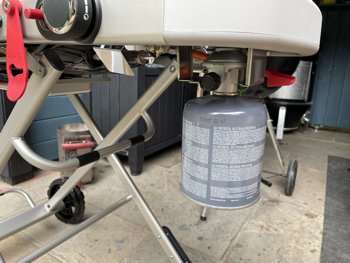 I bought several half-price disposable Weber LP cartridges in the B&Q sale. Pretty simple to connect to the grill but be careful to line up the thread correctly to avoid cross-threading. I’ve read about the cartridges getting iced up. I’ve not had that happen but they do get cold to the touch and condensation does appear and drips onto the floor, especially if it is humid. Not a problem as it is being used outdoors. You can connect a bigger tank if you get the right hose and adapter which is sold separately. As mentioned, before you have to remove the cartridge to lower the unit into ‘wheelie’ mode. When you do this the lid automatically locks and the grates are held in position.

There is a removable drip tray and they supply one foil tray to line the drip tray. The drip tray is a bit tinny and loose-fitting. It rattles as you wheel the unit and it can slide out. You will need to clean out the foil tray before transporting or you risk spilling grease everywhere. 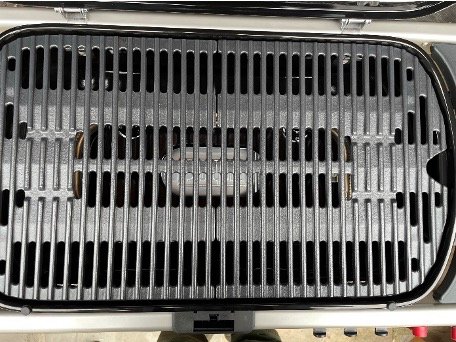 The cooking grates are enamelled cast iron which makes them a bit easier to keep clean and they also hold the heat well. The grate comes in two sections and they have solid sections on them to stop grease falling onto the gas burner below. These solid sections will no doubt get hotter than the surrounding areas. I’ve yet to try the sliced bread test to check the heat distribution.

This grill only has one burner. It is very easy to light and heats up very quickly from cold with the lid down. Therein lies one of the big advantages of a gasser. No waiting around for charcoal to ash over and vents to tweak before cooking. With only one burner with one control, there is only one zone of direct heat across the whole cooking area. No low and slow cooking, it’s only suited to direct grilling, or maybe something simmering in a pan or Dutch oven.

The side table is handy, you always need space to put stuff down. Tool hangers? I never seem to use them but it has three. A lid thermometer is a useful indicator. There are no grommets for passing thermometer wires into the cooking chamber but I doubt I’ll need them for this grill. A Thermapen will suffice. 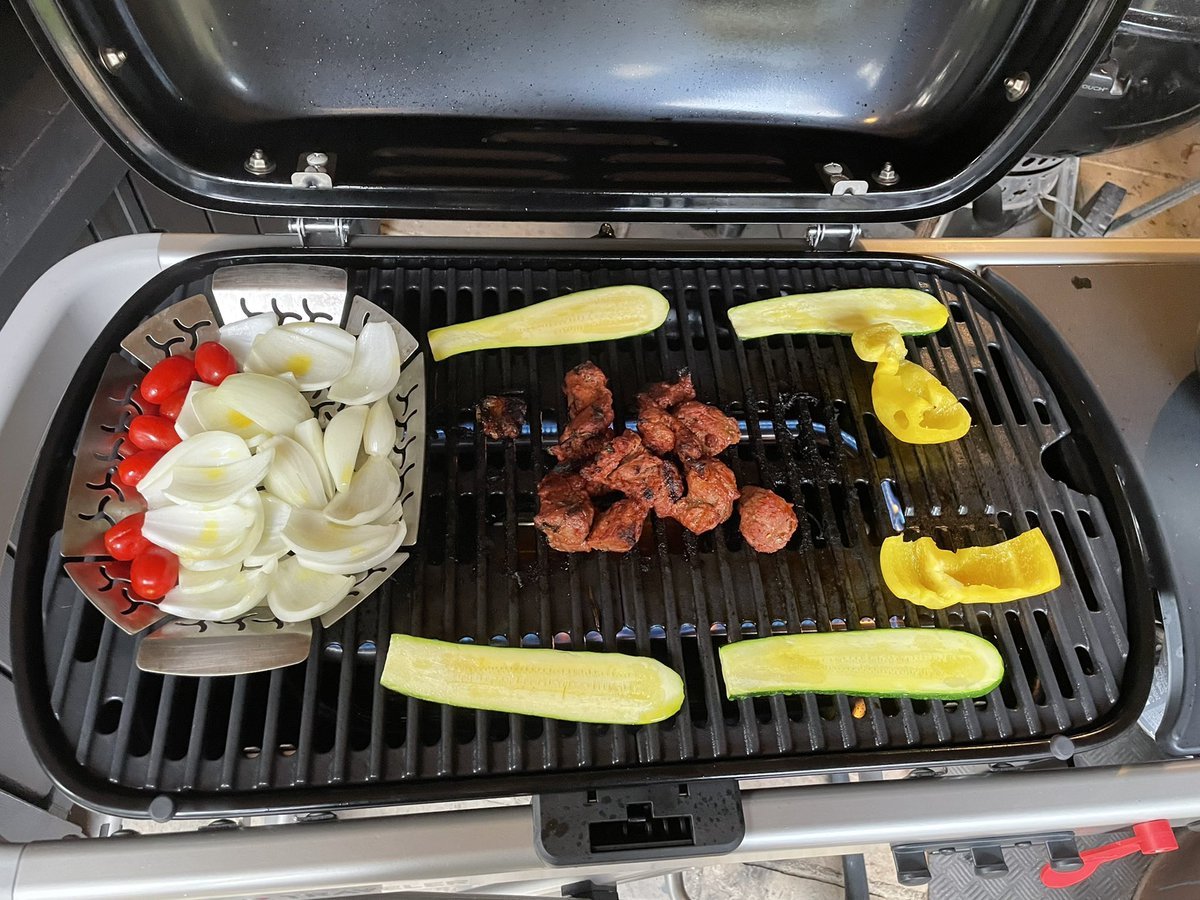 After an initial burn-in, I cooked some bacon. It came out evenly cooked and with the cast iron grates you can get some grill marks if that floats your boat. Quick and easy and the cooking smells kept outside. The next cook was a deconstructed lamb kebab. Chunks of marinaded neck fillet and a selection of grilled vegetables. I was pleased with the result and the ease of cooking. This grill has ample cooking area at 320 sq inches and none of the space is wasted. Apparently, you can fit 15 burgers on it! It’s still on the first gas cartridge but they seem to last – I think it’s estimated 2 hours on full power. Cleaning is fairly easy in terms of accessibility.

So, is it a good buy or a goodbye?

However, I have convinced myself it has a place in the BBQ collection. It is quick and easy to fire up (as a gasser should be).

With only one burner it has limited flexibility but is great for a quick steak, a fry up, or 15 burgers.

It is compact and doesn’t take up much space. It is a cleverly designed, attractive-looking grill. If you have the space it can be left up ready to go. So far, the quality is good. Portability is highly questionable due to its overall size and weight but it is maneuverable on its wheels. Overall it’s a keeper for the time being and likely to be my first and last gas BBQ